The chicken gut microbiome plays a crucial part in the preservation of intestinal health because of its ability to control host physiological systems and maintain intestinal homeostasis. Multiple interactions between the cells of the bird, the intestinal environment, the microbes, and the feed components occur within the gut. The gut microbiota primarily functions by competitively excluding harmful microbes and pathogens, preventing colonization, and so reducing the energy that birds would otherwise expend to maintain an active immune system against these pathogens.

The GI tract microflora is a mixture of bacteria, fungi, and protozoa, but bacteria are the predominant microorganisms. Microbiota composition of chicken gut includes more than 600 bacterial species from more than 100 bacterial genera. The most abundant phylum is Firmicutes followed by Proteobacteria and Bacteroides. The less abundant phyla are Actinobacteria, Tenericutes, Cyanobacteria, and Fusobacteria. The bacterial community varies with the location of the intestine. In crop, gizzard, and duodenum the bacteria from Lactobacillus constitute 99% of the population. In jejunum; Lactobacilli are predominant (L. salivarius and L. aviaries), while in ileum has a diverse and less stable population (Lactobacillus, Enterococcus, Escherichia, Shigella, and Clostridium). The most diversely populated fauna is found in the cecum. 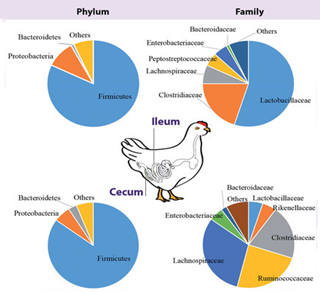 The chemical composition of the feed, to a considerable part, defines the compositions of the microbial community in the gut since various bacterial species have varied substrate preferences and growth requirements. The gut has distinct microbial profiles in each area, and as chickens get older, this community gets more complex.

Role of gut microbiota in prevention from pathogens

Through the mechanism of competitive exclusion, the bacterial population of the intestinal microbiota forms a protective barrier that lines the gut, inhibiting the growth of less favorable or pathogenic bacteria like Salmonella, Campylobacter, and Clostridium perfringens. According to theories, commensal (or friendly) bacteria predominate at attachment sites on gut cells, which limits the pathogens to attach and colonize there. Another theory is that the gut microbiota release substances called antimicrobial substances (bacteriocins) that prevent the growth of pathogenic bacteria and create an environment inappropriate for their growth.

The host's metabolism, immunity, and response to infection are all influenced by the intestinal microbiome, which functions as a signaling hub that combines environmental factors like nutrition with genetic and immunological signals. Since this interaction sets the path for a healthy gut and since the gut health of birds is what which drives toward profitability, understanding the relationship between themicrobiota and the host is of the utmost importance. 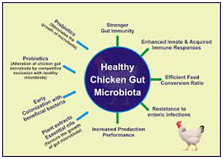